Home Top Stories Lanao del Sur, Marawi: the only areas in the country under MECQ

Bangsamoro Member of Parliament Zia Alonto Adiong, spokesperson of the Lanao del Sur Inter-Agency Task Force, told MindaNews Tuesday that there is a growing number of local cases and “we fear that if we don’t contain the spread effectively, we might face the danger of a widespread community transmission. That’s what we’re avoiding. We can’t afford to deal with multiple crises since the destruction left by the Marawi siege is still very much felt by the residents in the area.”

“All the data we acquired led to an undeniable fact: COVID-19 infection is surging in our province,” he said.

Earlier, Dr. Zafrullah Dipatuan, the Minister of Health of the Bangsamoro Autonomous Region in Muslim Mindanao (BARMM) tested positive for COVID-19. A few days later, Lanao del Sur Governor Mamintal Adiong, Jr. tested positive, too. Both were confined at the APMC and have since recovered.

The rest of the country are under Modified GCQ, which Duque defined as “the lowest community quarantine status…. Just before it progresses into the new normal, so to speak.”

In Mindanao, out of 27 provinces and 33 cities, 26 provinces and 31 cities are under MGCQ but all of these areas continue to record new cases.  There is no flattening of the curve as yet nearly seven months after lockdowns were imposed. 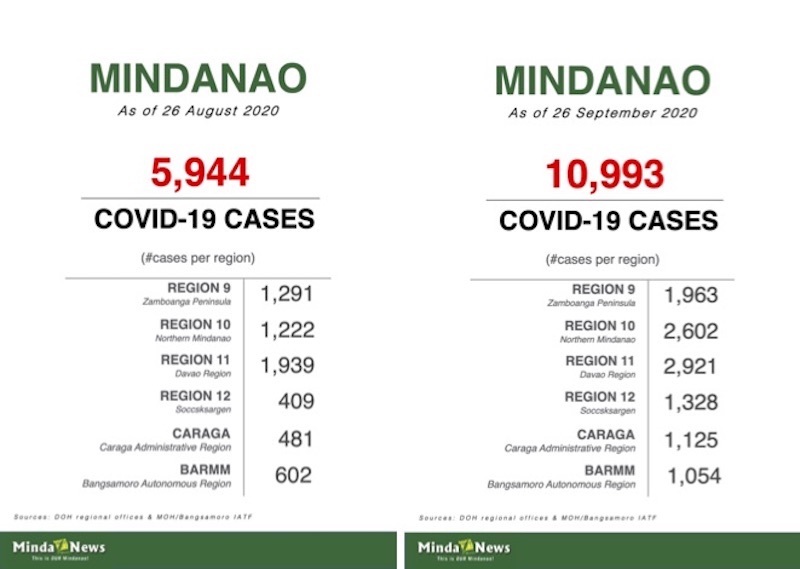 As of September 26, Mindanao recorded a total of 10,993 COVID-19 positives, up from 5,944 on August 26 and 501 on May 26, according to the data MindaNews culled from the five regional health offices and the BARMM’s Ministry of Health.