KORONADAL CITY (MindaNews / 28 March) — The Sangguniang Bayan (SB) of Tampakan in South Cotabato has passed a resolution seeking the lifting of the provincial ban on open-pit mining, which has been blamed for allegedly hampering for a decade now  the development of the Tampakan project, Southeast Asia’s largest known undeveloped copper and gold minefield.

Vice Mayor John Mark Baldon,  presiding officer of the SB or the municipal council, said the body is urging the Sangguniang Panlalawigan of South Cotabato to revisit its Environment Code, passed in 2010, particularly Section 22 which provides that “open-pit mining shall not be allowed in the Province of South Cotabato.”

The municipal board approved Resolution No. 589 urging the provincial board to revisit the Environment Code on March 15, a copy of which was obtained last Friday.

Sagittarius Mines, Inc. (SMI) has been pursuing the Tampakan project, with the mammoth deposits best extracted, according to the company, using the open-pit mining method.

The landowners under Certificate of Ancestral Domain Title 108 have already perfected the Free, Prior and Informed Consent (FPIC) opening their lands to mining operations, the resolution said.

Currently, all requirements for the mining operations to proceed have been completed, except for the ban on open-pit mining, which continues to impede the realization of the Tampakan project, it added.

In August 2020, the Tampakan SB terminated the municipal principal agreement (MPA) with SMI.

The deal was supposed to be reviewed and updated every four years, but this hasn’t been done since 2009, the municipal board said in a resolution.

There were attempts to review the MPA, but the mayor and other municipal representatives were excluded from the negotiations, it added.

“After scrutiny, there are provisions in the MPA that are considered vague, disadvantageous to inhabitants of Tampakan and unduly tie the hands of the local government unit [LGU] of Tampakan,” the council said in the resolution approved on August 10, 2020. “As such, the LGU cannot sit and fold its arms not to intervene in any action initiated by its people if, indeed, their rights have been violated contrary to some provisions of the agreement.”

The MPA was already a done deal rather than negotiated with the government, the resolution said.

The municipal board,  however, stated that it is open to negotiate a new MPA with the company.

Rene Pamplona, advocacy officer of the Convergence of Initiatives for Environmental Justice Inc., noted that the moves to lift the open-pit ban have failed in the past.

“In 2015, the provincial board, despite strong lobbying by pro-mining groups, reaffirmed the validity of the Environment Code and the ban on open-pit mining method,” he told MindaNews on Sunday.

Last October, Judge Vicente Peña, acting presiding judge of Regional Trial Court 11th Judicial Region Branch 24, ruled against a petition to revoke the prohibition, saying the open-pit mining ban in South Cotabato not only remained valid but was also deemed legal and consistent with the provisions in the 1987 Constitution.

Pamplona, a resident of Tampakan, is confident the “same thing” will befall the latest move of the municipal council urging the lifting of the open-pit mining ban, stressing the strong anti-mining stance of the Diocese of Marbel and other environment groups in the country against the Tampakan project.

Marbel Bishop Cerilo Casicas spearheaded the revival last year of the Tampakan Forum to ignite a “systematic and sustained” opposition against the Tampakan Project.

This, after learning that the environmental compliance certificate (ECC) of SMI, which was canceled by the late Environment Secretary Gina Lopez, had been restored by the Office of the President.

Sagittarius Mines, Inc. (SMI), developer of the mammoth S5.9 billion Tampakan copper-gold project in South Cotabato, has “reacquired” its environmental compliance certificate (ECC), one of the requirements needed to proceed to the commercial production phase, a senior environment official said.

“The ECC of SMI was reinstated by the Office of the President on May 6, 2019,” Saikol, reading from a prepared document, told reporters on July 9, 2020.

The local Catholic church has been consistently opposing the Tampakan project since its discovery in the 1990s on concerns over the environment, food security and human rights of the affected Lumad (Indigenous Peoples) communities.

Last September, the National Commission on Indigenous Peoples (NCIP) issued the certification precondition (CP) to SMI. CP is a certification that the affected IP community has given consent to the mining venture within their ancestral domain and that the FPIC process has been satisfactorily complied with by the company. 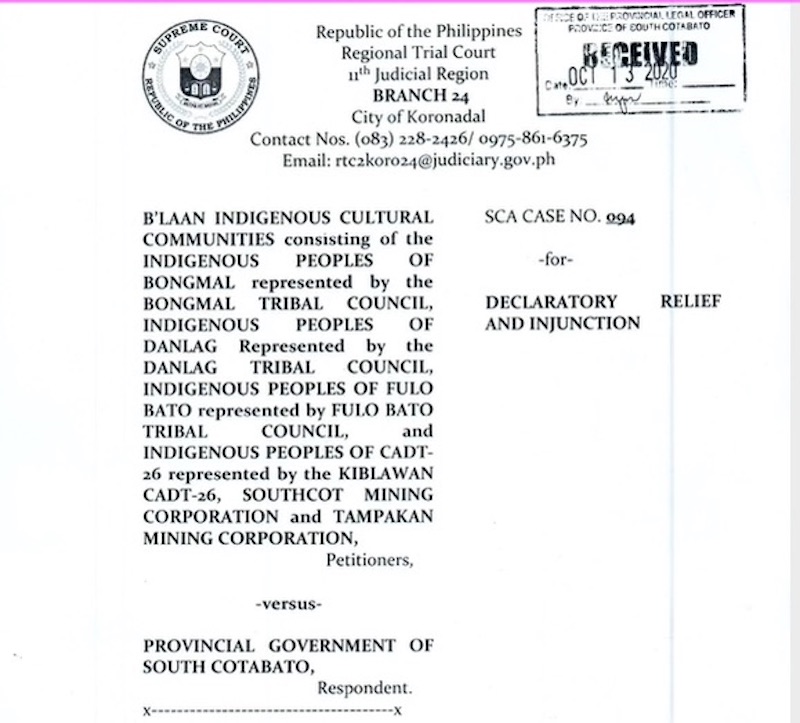 Bae Dalena Samling, chieftain of the Danlag Tribal Council in Tampakan, lauded the NCIP for granting SMI the CP for the Tampakan project, noting that the FPIC process had taken 10 years to complete.

“This mining project will change the lives of Indigenous Peoples for the better,” she said.

The CP and the ECC are crucial approvals – including the endorsements from LGUs covered by the project — needed by the mining company to start commercial production.

The Tampakan project, which straddles Tampakan in South Cotabato, Columbio in Sultan Kudarat and Kiblawan in Davao del Sur, has the potential of yielding per annum an average of 375,000 tons of copper and 360,000 ounces of gold in concentrate within the 17-year-life of the mine.

If developed, the Tampakan project “has the potential to make a significant contribution to the economic prosperity of the Philippines and enable a better future for the people of southern Mindanao,” SMI said on its website.

SMI has lately been recruiting employees with expertise on land acquisition, land settlement and resettlement, among others. (Bong S. Sarmiento / MindaNews)