DAVAO CITY (MindaNews / 04 September) –  From 427 ward beds for COVID-19 patients on August 18 to 432 on August 26, the state-run Southern Philippines Medical Center (SPMC) added 16 more beds on August 27 to make it 448 and yet another 27 on September 2 for a total of 475. The number of Intensive Care Unit (ICU) beds has remained at 92 — but all 567 beds for COVID-19 patients are occupied and many patients are being attended to while seated on plastic chairs or standing, or inside ambulances, awaiting admission.

“We are experiencing an unusually high volume of patients needing admission for COVID-19. Please bear with us as we try to allocate rooms/beds and provide the healthcare you need,” the SPMC announced on its social media page in the early hours of Saturday.

On September 4, Davao City posted its highest single-day increase in COVID-19 statistics since March 2020, with 498 new cases out of the region’s 1,031, also the highest single-day record for the region – and Mindanao.  It was the first time the Davao region breached the 1,000 mark in new cases.

Private hospitals in Davao City had earlier put up  signages declaring there are no beds for COVID patients, prompting those who were turned away to proceed to Tagum City, at least 50 kilometers away. But as early as August 29, finding a hospital in Tagum that would admit a COVID-19 patient was already a major challenge as the COVID-19 beds in the hospital there were also occupied.

A “spillage of patients,” was how SPMC chief Dr. Ricardo Audan described the situation on Thursday, the same day the hospital added 27 more ward beds, all immediately occupied, with many more on the waitlist.

“A tsunami of COVID-19 patients,” was the description offered by other doctors.

Audan was confident that the SPMC was ready for the expected surge of patients infected with the Delta variant of the SARS-Cov-2, the virus that causes COVID-19.

Because of the huge number of patients needing high-flow oxygen, SPMC ran out of oxygen supply on Thursday, Dr. Yvette Barez, infectious disease specialist and chair of the SPMC’s Infection Prevention and Control Unit, told MindaNews on Saturday evening.

Last month, Audan said SPMC has two oxygen plants with six fully functional oxygen generators with a combined maximum production of 873 tanks per day. He said the average daily consumption of the hospital was 1,223 tanks with the rest of the requirement supplied by two private suppliers. He said SPMC was going to open its hyperbaric oxygen plant that is capable of producing 300 tanks of oxygen.

Barez said the supply ran out because of the sheer volume of patients requiring high-flow oxygen and a delay in the delivery of externally sourced supply. The delay issue has been addressed by one of the two suppliers, which promised to increase supply to SPMC.

“Patients on high flow machine need 40 to 60 liters of oxygen per hour so a total of about two to four tanks per hour ang ma-consume,” Barez explained.

She reminded the public to stay home, stay away from parties, leisure biking and other gatherings and observe minimum public health standards.

She said there are many patients still on the waitlist at the isolation triage and in the emergency department.  The sheer number of patients has made physical distancing a problem, Barez said.

SPMC, the country’s largest hospital, has an authorized bed capacity of 1,500 but presently has 1,200 beds due to physical distancing protocols

In that same presser on August 9, Dr. Rachel Joy Pasion, head of the Department of Health (DOH)-Davao’s Regional Epidemiology Surveillance Unit said eight Delta variant cases had been detected in the region. By August 29, it rose to 48 but this number represents only those whose specimens were sent to the University of the Philippines-Philippine Genome Center in Diliman for whole genome sequencing, and confirmed to be a Delta case.

In an online press briefing on Tuesday, Dr. Rabindra Abeyasinghe, Philippines country representative of the World Health Organization (WHO) announced that the highly contagious Delta variant “has emerged as the dominant variant,” and that  “we are in community transmission.”

The highest single-day increases posted by Davao City with 498 cases and the Davao region with 1,031 cases on September 4 are the highest among Mindanao’s 27 provinces and 33 cities since the region recorded its first COVID-19 positive in mid-March last year.

Positivity rate or the number of those who tested positive among the total tested in SPMC ranged between 26.27% and 40.90%  in seven days, from August 27 to September 2.  Out of a total of 8,917 who underwent RT-PCR (Reverse Transcription-Polymerase Chain Reaction) testing at SPMC during that period, 2,861 or 32.1 % tested positive.

The  WHO  notes that a positivity rate of below 5% is one of the indications the infection is under control.

Davao City recorded a total of 4,562 new cases out of the regional total of 9,120 within the two-week period from August 22 to September 4.  MindaNews noted the average daily attack rate (ADAR) of the city at 18.3 per 100,000 population and the region at 12.4, both falling under the “high risk” classification. An ADAR of less than one means low risk, 1 to 7 is moderate and more than that is considered high. 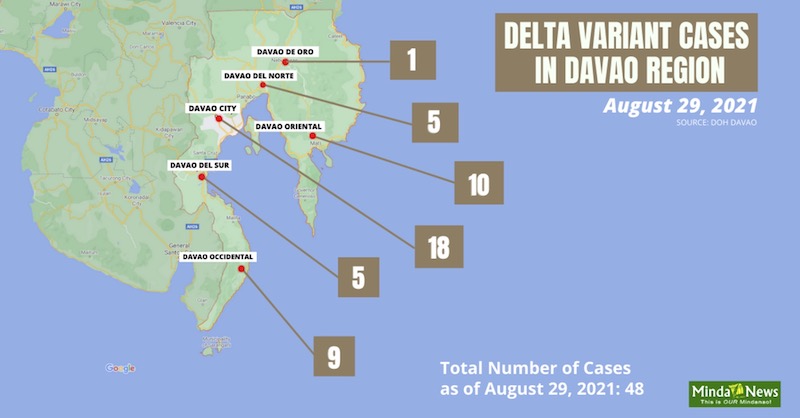 Out of 48 Delta variant cases detected in the region as of August 29, Davao City also posted the highest at 18 followed by 10 in Davao Oriental, nine in Davao Occidental, five each in Davao Del Norte and Davao del Sur and one in Davao de Oro.

Mindanao recorded a total of 157 Delta variant cases as of August 29, with 86 in Northern Mindanao.