Aspirants in the 2022 Philippine elections ran tens of thousands of television, radio, print, and billboard advertisements worth P3.67 billion ($72 million) from January to September 2021 –– before filing their certificates of candidacies (COCs) –– demonstrating how expensive it is to run for public office in the Philippines.

“It is important for voters to consider it a red flag when their candidates spend so much,” said former elections commissioner Luie Tito Guia. “Hindi mo alam ang (You don’t know their) motivation for running if they are willing to spend that much,” he said. The tally by the Philippine Center for Investigative Journalism (PCIJ) came from Nielsen’s monitoring of potential candidates’ ad spending beginning January 2021. The amounts were based on published rate cards, but industry players and ad buyers interviewed by PCIJ said candidates could get discounts.

TV took the bulk of Cayetano’s spending as he plotted a presidential campaign. He ran a total of 584 TV ad spots worth P595.5 million ($11.9 million) in various networks, the bulk of which were aired in September (P185.7 million). He also aired radio ads worth P14.8 million from January to September.

Despite huge ad spending, Cayetano had a poor showing in presidential surveys. In October, when the filing of COCs began, Cayetano dropped his presidential bid and instead filed his COC for the Senate, where his poll numbers were better.

Sen. Sherwin Gatchalian, who is seeking reelection, followed Cayetano, running ads worth P555 million during the nine-month period based on rate cards.

Gatchalian poured money on radio ads, airing 16,436 spots worth P420.2 million. It’s an average of 60 radio spots a day from January to September.

The lawmaker, the son of businessman William Gatchalian who ranked 10th in the 2016 elections for senator, started airing TV ads only in September, or a month before the filing of COCs. He aired a total of 177 TV spots worth P134 million.

Gatchalian himself was rumored to be eyeing the vice presidency after the publication of print ads that showed him alongside Davao City Mayor Sara Duterte — worth P1.3 million — from May to June. PCIJ reached out to the senator and a campaign staff member requested for Nielsen’s data, but he had yet to issue a statement as of this writing.

The campaign staff member told PCIJ that the senator enjoyed “more than 30% discount” based on rate cards. She said the senator’s family paid for the ads.

PCIJ also reached out to Cayetano, but had yet to receive a response.

The Nielsen data PCIJ had access to did not include candidates’ spending on online platforms, which required a separate subscription.

Facebook is transparent with its advertising data through the Ads Library, a tool that records spending on social issues, elections or politics. It showed total spending of P129 million on the platform from August 2020 to November 2021, although the list was not exclusive to politicians.

Gatchalian was the top spender on Facebook, running a total of 746 ads worth P7.8 million from August 2020 to November 2021.

PCIJ has no access to data on candidates’ ad spending on Youtube, TikTok, and other popular social media platforms.

Senate hopefuls spent more than the aspirants for president on traditional media ads, based on Nielsen’s monitoring.

Mark Villar, the former public works secretary who also comes from big business, ran ads worth P524.9 million and was the third top spender during the nine-month period.

He doubled down on his spending in September, running 428 TV spots worth P354.7 million and making him the top TV ad spender that month. He  ran an average of 14 ad spots a day, accounting  for 25% of all candidates’ total ad spend on TV during that period.

Villar also topped radio ad spend in September, recording 3,559 radio spots or an average of 118 ads a day. The ads were worth P91.4 million and accounted for 29% of the total radio ad spend that month. He started running his own ads only in August but his heavy spending was reminiscent of the campaign strategy of his own father, former Senate president Manuel Villar Jr., who consistently topped ad spending in elections where he was a candidate.

Combining their advertisements, the Villars emerged as the top ad spender during the nine-month period, overtaking Cayetano.

PCIJ reached out to Mark Villar’s staff but had yet to receive a response.

Binay followed Cayetano in ad spending from January to September but was overtaken by other candidates in September.

Senators Juan Miguel Zubiri and Risa Hontiveros, who are also seeking another Senate term, ran ads worth P71.1 million and P5.5 million, respectively. Antique Rep. Loren Legarda, a former senator who wants to get back her old seat, ran ads worth P3.1 million.

Philippine laws limiting candidates’ ad spending will not apply until the 90-day campaign period begins in February 2022. Under Republic Act 9369, the 2007 election automation law, those who filed their COCs will only become candidates during that period and thus “unlawful acts or omissions applicable to a candidate shall effect only upon the start of the… campaign period.”

The head of the Comelec Campaign Finance Office, lawyer Efraim Bag-id, said their hands were tied because there are no sanctions against premature campaigning. “The mere filing of the COC does not make them automatically a candidate… Prohibitions pertaining to candidates will not be applicable to them,” Bag-id told the PCIJ.

With Cayetano sliding down to the Senate, Manila Mayor Francisco “Isko Moreno” Domagoso became the top spender among presidential aspirants. He started spending on TV ads in September, running 227 spots worth P305.9 million based on rate cards. 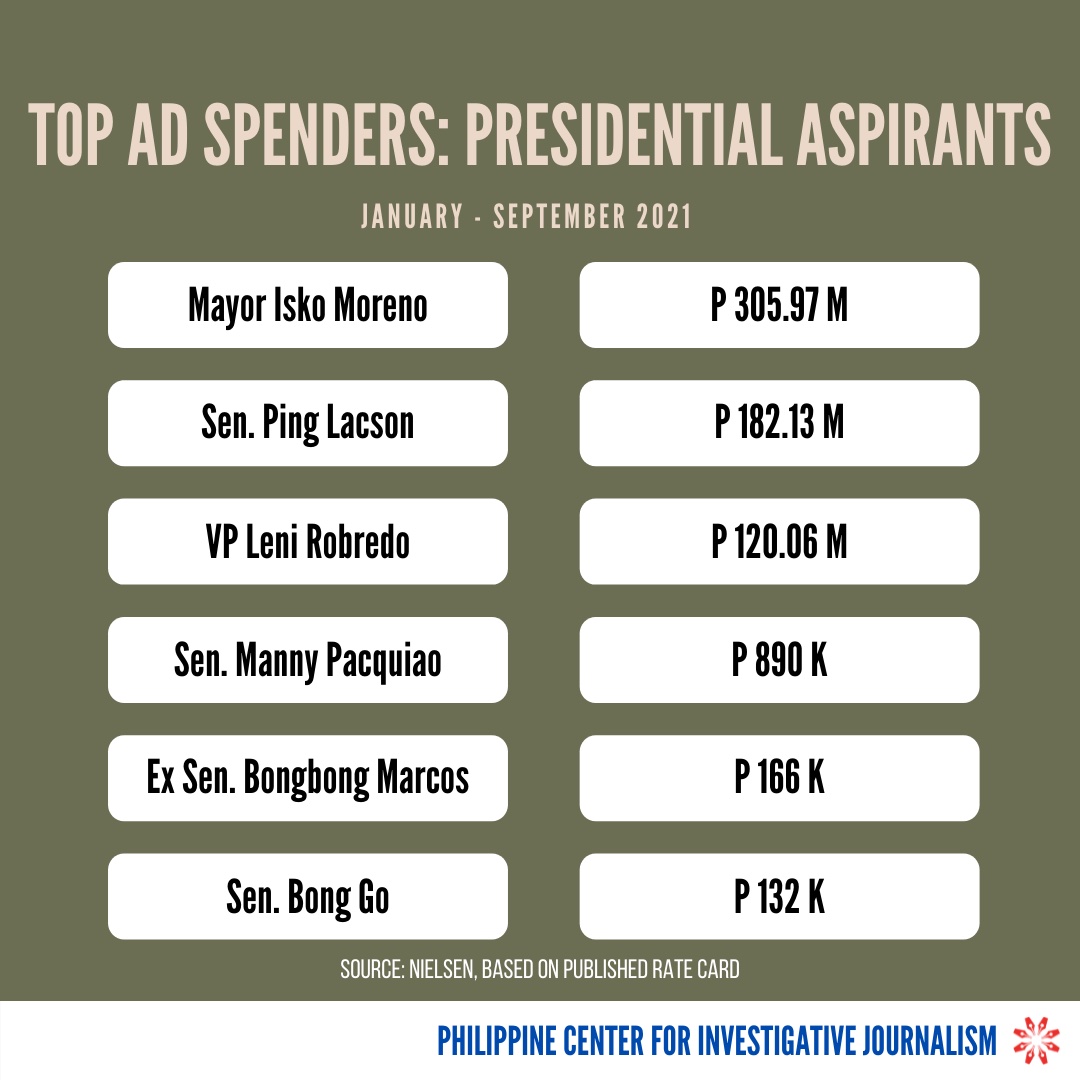 Lacson started running ads in August and doubled down on spending in September, when he spent P133.4 million on TV ad spots and P26.3 million on radio ad spots.

Vice President Maria Leonor “Leni” Robredo aired ads worth P120 million. Unlike other candidates, she poured her resources on radio spots. She topped ad spending on the platform among presidential aspirants in September after running 1,602 spots worth P57.8 million.

Before September, she aired radio ads worth P51.8 million.

Robredo started running TV ads in September, but aired only 16 spots worth P9.5 million based on rate cards. She also ran six print ads worth P784,143.

Both Pacquiao and Go have enjoyed considerable media exposure through the news, however. Pacquiao had a boxing bout in August while Go was always present during President Rodrigo Duterte’s televised speeches and events.

Sen. Francis “Kiko” Pangilinan was the top spender among aspirants for vice president. Like his running mate Robredo, Pangilinan poured his resources on radio ads, spending almost all of his P21.7-million ad budget on the platform. He also ran print ads worth P76,638.

On top of ads she shared with Gatchalian, Davao City Mayor Sara Duterte ran separate ads worth P8.9 million on radio and P2.8 million on billboards.

Senate President and television host Vicente “Tito” Sotto III, the survey frontrunner, recorded only P75,622 in spending. But he enjoyed a high-profile comeback on popular noontime show “Eat Bulaga” to reunite with his former co-hosts, before announcing his 2022 bid.

Gov. Amado Espino III of Pangasinan and a number of politicians from the northern Luzon province spent heavily on radio ads.

Espino was among the top spenders, recording P92.5 million worth of radio ads and beating many national candidates on the platform.