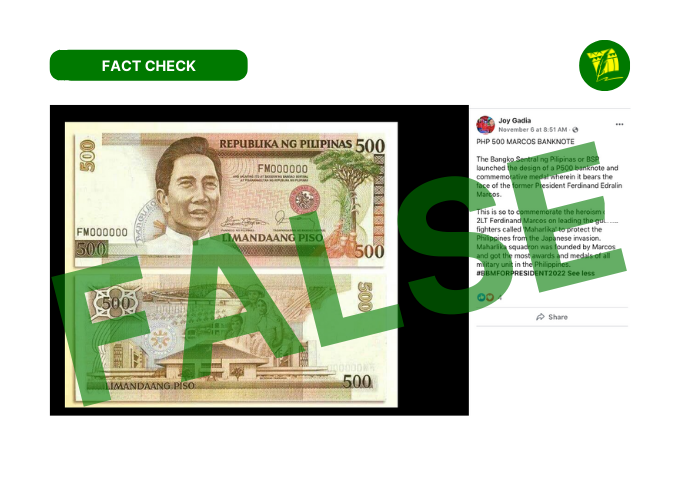 The Bangko Sentral ng Pilipinas (BSP) has launched a P500 commemorative banknote featuring Marcos to honor the war exploits of the then young Marcos during the Japanese occupation in the Philippines.

The BSP has not issued new banknote designs or a new design series (NDS) as of November 9, 2021.  https://www.bsp.gov.ph/SitePages/MediaAndResearch/MediaDisp.aspx?ItemId=6016  Several Philippine media outfits disseminated the BSP advisory against the 500-piso Marcos banknote.

In early 1986, a new 20-piso banknote appeared. After the 1986 People Power Revolution and the new 1987 Constitution was promulgated, the 500-piso banknote with the face of Benigno Aquino, Jr. on the obverse side was introduced.

Pursuant to BSP Circular No. 954, Series of 2017, the NDS banknotes were demonetized after June 30, 2017. https://www.bsp.gov.ph/SitePages/CoinsAndNotes/NewDesignSeries.aspx

The NDS was replaced by the New Generation Currency (NGC) series in 2010 and is still being circulated until the present. https://www.bsp.gov.ph/SitePages/CoinsAndNotes/NewGenerationCurrencyBanknotes.aspx

Under the NGC’s P500 banknote, the portrait of Benigno Aquino, Jr. was redesigned and a portrait of his wife, former president Corazon Aquino, was added, a scene from the EDSA Revolution was added on the lower left of the obverse and the Ninoy Aquino Monument was added in the lower middle. The reverse now features the Puerto Princesa Subterranean River National Park and the Blue-Naped Parrot.

The BSP issued the advisory on the fake 500-piso Marcos commemorative banknote after it was first posted by Cebu Dairy News, a satirical Facebook page.