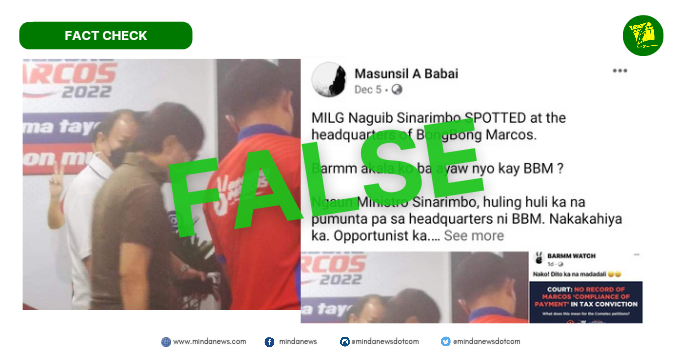 Bangsamoro Minister of the Interior and Local Government Naguib Sinarimbo did not visit the headquarters of presidential aspirant former Senator Bongbong Marcos, Jr.

“I don’t even know the HQ (headquarters) of Marcos,” Sinarimbo said on Facebook Messenger.

A post with the photo resembling Sinarimbo walking at the 2022 camp of Marcos surfaced on Facebook on December 5 and was since shared over a hundred times. Some users shared the post at Bangsamoro group pages with thousands of followers.

Part of the caption stated:

BARMM stands for the Bangsamoro Autonomous Region in Muslim Mindanao, which is headed by Interim Chief Minister Ahod Ebrahim.

Ebrahim is also the chair of the Moro Islamic Liberation Front, which formed a political party called the United Bangsamoro Justice Party (UBJP).

The UBJP has not endorsed Marcos, the standard bearer of Partido Federal ng Pilipinas.

Sinarimbo, who is also the UBJP secretary general, said their party committed to support whoever President Rodrigo Duterte will endorse for the presidential race.